“The third quarter was transformative for Indaptus as we successfully closed the merger with Decoy Biosystems, Inc. (“Decoy”) and completed a $30 million private placement to support our exciting new clinical programs,” said Jeffrey Meckler, Chief Executive Officer of Indaptus. “We are executing to our strategy of advancing Decoy20 as a potential new treatment modality for a variety of cancer indications with unmet medical need. Our goal to enter the clinic with Decoy20 in 2022 remains on track, however, we now plan to file the IND next year as we are in the process of recruiting a Chief Medical Officer to lead our clinical trials. We believe we have a unique opportunity to shape the course of cancer treatment by activating both the innate and adaptive immune systems with our therapeutics and look forward to making our vision a reality.”

Received Notice of Allowance for Strategic Patent in Virology

In September, Indaptus announced that the United States Patent and Trademark Office issued a notice of allowance for claims related to the Company’s platform technology in the field of virology. The patent, titled, “Methods of Treatment of Infections Using Bacteria,” (Application No.16/584,644) provides broad protection for the application of the Company’s platform technology alone and in combination with standards of care for the treatment and inhibition of hepatitis B virus (HBV) and human immunodeficiency virus (HIV) infections.

In August, Indaptus closed its previously announced merger with Decoy and the completion of a $30 million private placement. In addition, the Company announced a corporate name change to Indaptus Therapeutics, as it better reflects the Company’s therapeutic focus.

Therapeutics Indaptus Therapeutics has evolved from more than a century of immunotherapy advances. The Company’s approach is based on the hypothesis that efficient activation of both innate and adaptive immune cells and associated anti-tumor and anti-viral immune responses will require a multi-targeted package of immune system activating signals that can be administered safely intravenously. Indaptus’ patented technology is composed of single strains of attenuated and killed, non-pathogenic, Gram-negative bacteria, with reduced i.v. toxicity, but largely uncompromised ability to prime or activate many of the cellular components of innate and adaptive immunity. This approach has led to broad anti-tumor and anti-viral activity, including safe, durable anti-tumor response synergy with each of five different classes of existing agents, including checkpoint therapy, targeted antibody therapy and low-dose chemotherapy in preclinical models. Tumor eradication by Indaptus technology has demonstrated activation of both innate and adaptive immunological memory and, importantly, does not require provision of or targeting a tumor antigen in pre-clinical models. Indaptus has carried out successful GMP manufacturing of its lead clinical oncology candidate, Decoy20, and is currently completing other IND enabling studies.

This press release contains forward-looking statements with the meaning of the Private Securities Litigation Reform Act. These include statements regarding management’s expectations, beliefs and intentions regarding, among other things, our product development efforts, business, financial condition, results of operations, strategies, plans and prospects. Forward-looking statements can be identified by the use of forward-looking words such as “believe”, “expect”, “intend”, “plan”, “may”, “should”, “could”, “might”, “seek”, “target”, “will”, “project”, “forecast”, “continue” or “anticipate” or their negatives or variations of these words or other comparable words or by the fact that these statements do not relate strictly to historical matters. Forward-looking statements relate to anticipated or expected events, activities, trends or results as of the date they are made. Because forward-looking statements relate to matters that have not yet occurred, these statements are inherently subject to risks and uncertainties that could cause our actual results to differ materially from any future results expressed or implied by the forward-looking statements. Many factors could cause actual activities or results to differ materially from the activities and results anticipated in forward-looking statements, including, but not limited to, the following: Indaptus’ plans to develop and potentially commercialize its technology, the timing and cost of Indaptus’ planned investigational new drug application and any clinical trials, the completion and receiving favorable results in any clinical trials, Indaptus’ ability to obtain and maintain regulatory approval of any product candidate, Indaptus’ ability to protect and maintain its intellectual property and licensing arrangements, Indaptus’ ability to develop, manufacture and commercialize its product candidates, the risk of product liability claims, the availability of reimbursement, the influence of extensive and costly government regulation, and Indaptus’ estimates regarding future revenue, expenses capital requirements and the need for additional financing following the merger. These risks, as well as other risks are discussed in the proxy statement/prospectus that was included in the registration statement on Form S-4 filed with the SEC in connection with the merger. All forward-looking statements speak only as of the date of this press release and are expressly qualified in their entirety by the cautionary statements included in this press release. We undertake no obligation to update or revise forward-looking statements to reflect events or circumstances that arise after the date made or to reflect the occurrence of unanticipated events, except as required by applicable law. 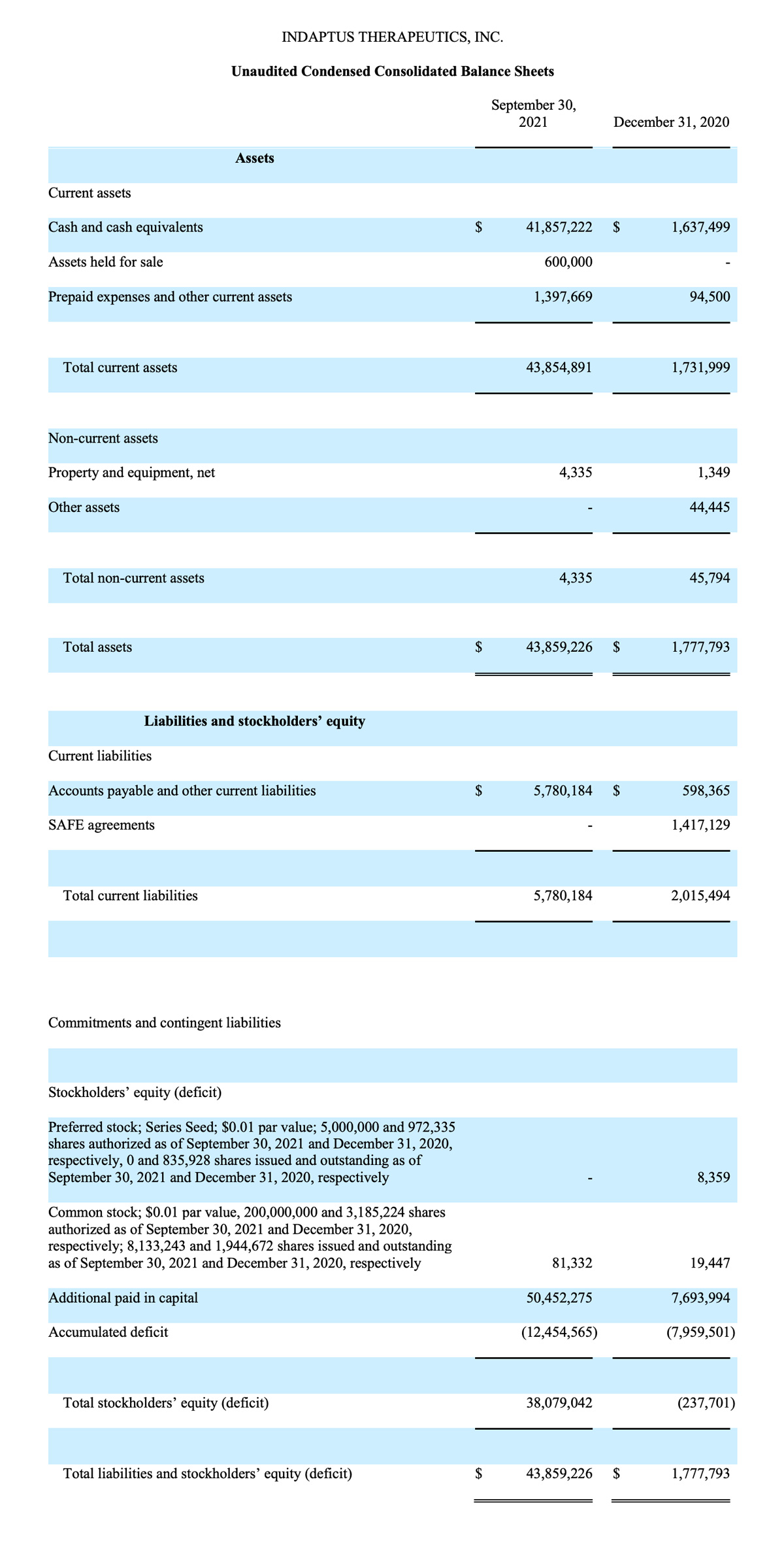